The College-Only Space of Wessley Mitchell
Who's Online?
X
Friends

Thanks for checking out Wesspace, my effort to return college students to their exclusive environment from which they have been wrongly exiled. Head back to the promised land, and sign up now!

Wesspace has been relaunched! Wesspace is now open to new user registration and has been jam-packed with new features. To start, click Register above.

If you want to learn more about Wesspace, dig a little deeper.

Already Have a Wesspace?
Enter your name and password in the appropriate fields above and click Sign In to return to your Wesspace, see which friends are online, find new friends, add pictures, send messages, and perform a plethora of other friend-related actions.
Don't Have a Wesspace?
Register to get yours now. It's free and will give you access to all the benefits a Wesspace membership has to offer. So mix it up with the rest of your college community and join immediately!
What the Heck?
Now that, my friend, is a good question.
Click below for answers:

Don't have time to sign up now? Don't forget to add this site to your Favorites. Thanks!

Welcome to Wesspace, the College-Only Space of Wessley Mitchell! To get started, you can go to your profile, edit your profile, or add some pictures. This can also be done from the Profile menu in the Student Card at the top of the screen.

To find friends, just start typing into the Search field in the upper-left, and names will instantly appear, unless you don't have any friends yet. If you don't, type a name, a school, or any other criteria by which you'd like to find new friends and click "Find New Friends." To start out, try searching for .

Go to the profile of an online friend and click the "Start a Cacophony" button at the top. You'll immediately see a chat-style pane appear, and once your friend accepts the invitation, you both will be able to chat, exchange links, and invite other friends to join in an enormous (but invitation-only) conversation!

Within your Student Card, click Communities to access those which you have already joined, or click Join New Community at the bottom of the menu to add another. Communities are useful because, as a member, you'll have the right to "Shout" at the rest of the community, and when you do, all community members will be notified of a community activity. When they check this community activity, they'll see all community messages organized in the community's "Shouts." You don't even have to be an administrator to use this feature!

Wesspace is not a secret to be kept! Don't forget to spread the word about Wesspace to your friends. You don't have a college-age friend who couldn't benefit, so tell everyone you see. Don't forget to use other so-called "social networking" sites like Facebook, MySpace, and Orkut.

Thanks for registering for Wesspace.net! If you were one of the first 100 people to register since the beginning of the deal, congratulations on scoring a free Wesspace.net T-shirt! More details will be fired your way soon. In the meantime, fill out your profile, post some pictures, add some friends—you know the drill. You might even express your love of Wesspace.net on your Facebook status. I'm just sayin'.

(T-shirt availability dependent on Wyatt's dedication, price elasticity of demand, and a handful of other external factors.)

To find out about more cool tools for use with Wesspace, go the Tools page.

This Web site was written entirely by me, Wessley Mitchell. Ever since Facebook gained traction as a college-only student network Web site, friends would ask me, "Could you build something like that?" At first, the site seemed too large a task for one man, but after a while, I began to respond, "Maybe, but it would take some serious time."

After performing various types of server-side scripting for several paid projects and school assignments, the inspiration came to me to try to build a social network myself using no outside code whatsoever. I brought the idea up during a volleyball game one crisp summer day, and my friends all agreed they would join. Even more motivating were Facebook's continual moves away from college student exclusivity: first came high schoolers, then various non-education fields, and finally the floodgates collapsed, drowning our beloved social network in a sea of mediocrity (that is, non-students). My friends had become very disenfranchised following these Facebook manuevers.

A week or two later, driving to again play volleyball, Samuel Maddy was further pushing the idea of a social network made from scratch when he tossed out a name which sounded so corny, it just might work: Wesspace, a title which thoroughly utilized my unusual second s. We continued our conversation, and by the time I had arrived at my destination, my mind had been made up.

Over the next month, Wesspace was slowly built in my free time, moving through private internal testing and private beta. Over the following months, it was released as a public beta, moved into release candidacy, was taken offline for big changes, and was finally relaunched with loads of new features. Since then, Wesspace continues to grow, adding members and features as quickly as possible.

Technically speaking, Wesspace was made entirely with hand-written code. Not a single WYSIWYG (What You See Is What You Get) editor has ever touched this site. Notepad has been my only tool. On the face of Wesspace, it has features like most any other Web site: XHTML, CSS, and JavaScript. Less apparent is its extensive use of ASP.NET combined with an AJAX-like data retrieval method I wrote up (which, after testing, has been much easier and faster than AJAX itself).

For more information about me, the guy who built all of this with his bare hands, visit my Web site.

This community has not yet
uploaded a picture.
Edit Pictures and Captions
Add | Cancel
Click Below to Remove:

Find friends in the upper-right Search field, then click them to add them to the list below. Currently Inviting:
Shout to Community Join Community Leave Community Edit Community Edit Picture and Caption Invite Members Delete Community

Find your picture by clicking "Browse..." below. Only JPG, GIF, and PNG images are allowed. If you don't know what that means, don't worry about it. By completing this form, you agree that this picture is your property and not pornographic. Note that larger images sizes will take longer to upload, so there will be an unavoidable wait during the upload process.

This user has not yet
uploaded a picture.
Edit Pictures and Captions

Fill in the fields below to obtain your Wesspace. You'll need to enter a valid college e-mail address (ending with a ".edu") to apply.

Please note that all information below is permanently stored to your account, except for the College Year field which will (hopefully for you) change every year. Be sure to type all data accurately and avoid using abbreviations. This will ensure that all users of a common high school for example will have matching High School field values. In this case, please enter "Daviess County High School," not "DCHS" or "Daviess County."

Once again, most of what will be entered below is unchangable, so please double-check for typos. All information not on this page will be added later and will be easily editable.

Congratulations! The user  was successfully registered.

But you can't sign in just yet. All Wesspace users must verify their e-mail addresses to ensure they are truly attend a college. This verification process is known as activation. Please check your school e-mail address (shown as entered above in bold) immediately for an activation e-mail message from Wesspace. Once obtained, follow its brief directions to be activated.

If you don't receive it, check these possibilities:

Enter the information below as originally entered to complete your Wesspace account activation.

Your activation failed. The information you entered was incorrect. Try again.

I've you've already re-entered your information and received this message multiple times, it is likely your account was deleted because the system assumed the address you provided was invalid. Please re-register.

Wesspace's Terms of Service/Privacy Policy are rolled into one. I'm not even sure that makes sense, but let's roll with it for now. The bottom line is that I don't owe you a thing. You can use my site, but if I believe that your content is objectionable, I will delete it. If I find you are objectionable, I will delete you. In order to make Wesspace an honest, real community, fictious accounts are not allowed.

As for personal information, I will never voluntarily give it away, but in the event that my host gets hacked by some maniac computer programmer, I can't really do too much to protect you. This is why it's a good idea not to put credit card numbers, lock combinations, or where you bury your second house key on Wesspace. You must be 18 or older to use this site, and you may not place illegal information of any kind or nude/pornographic images on Wesspace.

By using this site, you may not send spam to other users. Although such a task would be difficult and unfruitful compared to other mediums, committing such an act will require dire consequences. I will delete you and won't feel a single pang of conscience.

These terms can change at my discretion, and by using Wesspace, you agree to them. If at any time you'd like to see them again, return to the Registration page by clicking Register when first arriving at Wesspace.net (before sigining in). See ya on Wesspace.

Change your password or delete your account. If you feel the need to do either, I'd recommend the former.

Below are some handy tools for use in conjunction with Wesspace. More should be added over time. 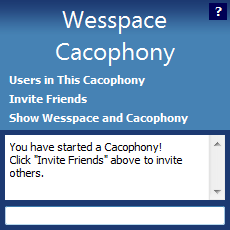 Wesspace Cacophonies allow you to chat with an unlimited number of your online friends in a single room! From an online friend's profile, click the Start Cacophony button at the top of the page. Then, from the revealed chat pane, click "Invite Friends" and start typing to get your other buddies in on the action. And for users on the go, navigate to wesspace.net from your phone or other mobile device.

For Windows 7 and Windows Vista users, download the Wesspace Student Card gadget. From your desktop, stay updated on your messages, online friends, and various alerts without making a special trip to the site. Then, when you notice a message has arrived, see a friend come online, or spy a new alert, just click to head straight for Wesspace.

Start the download, and save it to your Desktop folder. Run the downloaded file, and when the dialog appears, click Install. The gadget should immediately appear on your desktop. Be sure to follow any additional directions.

Wesspace Search in Your Browser 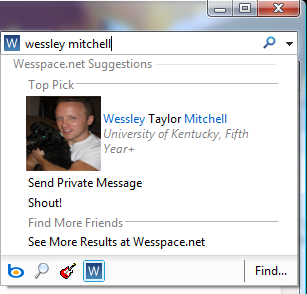 Search all of Wesspace from anywhere on the Web by placing Wesspace's search in your search bar (the upper-right corner of your browser)! Now you'll be able to find a friend, find somebody new, and even send messages and shouts. It's fast and pretty awesome. To use it, click the down arrow in your search bar (again, in the upper-right corner of your browser) and go to Add Search Provider > Wesspace.net (or something similar to that, depending on your browser).

In the event of a lost phone, use this to get back your friends' numbers. This is a replacement to the futile "I Lost My Phone..." groups from other Web sites.

Want to find your Wesspace friends on Xbox Live? Use this tool to grab all your friends' gamertags, and all friends who have listed their gamertag will be shown below.

X
This name has already been taken.

X
Make Your Own Community or Find an Established Community: